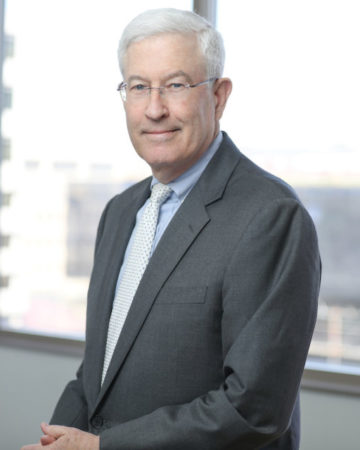 Paul Maloney is a trial lawyer who focuses his practice in product liability, professional liability, and commercial litigation.  Paul has over 30 years of trial experience and has tried more than 200 cases.  He is a Fellow in the American College of Trial Lawyers.

In a recent case, he successfully defended an attorney through a Daubert challenge, which disqualified Dr. Ritchie Shoemaker as a mold expert.  In another matter, Paul successfully defended a manufacturer against claims that the vaccine preservative thimerosal caused autism in 125 plaintiffs.  He has many reported decisions in local, federal and state court cases.

In 1987, Paul was appointed Associate Independent Counsel to James C. McKay in the investigation of whether former White House aide Lyn Nofziger illegally lobbied his former administration colleagues on behalf of private clients.

Before joining the firm in 1984, Paul served as an Assistant State’s Attorney for Prince George’s County, Maryland.  Previously he clerked for the Hon. Joseph M. Hannon, Superior Court Judge for the District of Columbia.

Paul is a Fellow of the American College of Trial Lawyers, an honor extended to less than once percent of the bar.  The organization recognizes litigators for mastering the art of advocacy as well as those whose professional careers have been marked by the highest standards of ethical conduct, professionalism, civility, and collegiality.

Martindale-Hubbell has recognized Paul with the AV Preeminent rating.  He is also rated in Super Lawyers for Personal Injury Defenses: Products Liability.  Medmarc Insurance Group honored him in 2000 as its Lawyer of the Year.

Paul frequently speaks on many subjects, including professional and product liability risk-management and business practices.  He has also given numerous talks for the District of Columbia Bar on topics such as the DC Superior Court Rules and litigation tactics.

Paul is a Board Member for the Washington Jesuit Academy, founded in 2001, which provides a tuition-free, extended-day education to boys from low income communities.

US Courts of Appeals: