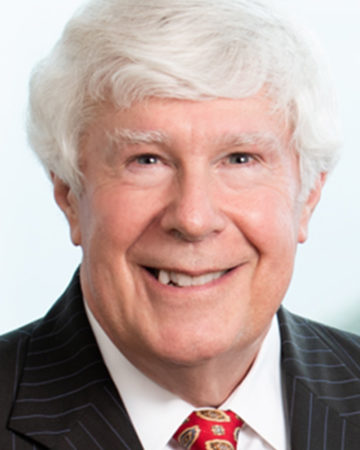 Robert Scott focuses his practice primarily on complex civil trial litigation. With more than 45 years of practice, he has experience litigating in all areas of product liability, drugs and medical devices, environmental/toxic torts, construction and insurance coverage in state and federal courts throughout the United States. Bob also has served as national counsel in insurance coverage and product liability litigation and has represented a number of companies in class action litigation.

Bob has published articles and lectures nationwide on issues pertaining to drugs and medical devices, product liability, toxic tort/environmental law, trial skills and insurance coverage issues. Bob is the recipient of the 2018 John H. Mudd Lifetime Achievement Award from Maryland Defense Counsel, and the 2016 recipient of the DRI Louis B. Potter Lifetime Professional Service Award, which honors an individual who exemplifies the highest professionalism and service to the legal profession. He is AV® Preeminent™ rated by Martindale-Hubbell, the highest possible peer review rating for ethics and legal ability.

Early in his career, Bob served as a law clerk for Chief Judge Edward S. Northrop, United States District Court for the District of Maryland.